Diagnosed with autism at 2,6 years,,but lost contact with us between 12-14 months.Insomnia for 10 years,stopped with ORFIRIL,anti seisure med,at 11 years.Started ABA at 2 and 8 months and did it for 9 years.with some resultsAlmost nonverbal,he can say about 100 words but uses just some,he cannot make 2 words sentences,probably apraxia of speech but found no doctor to diagnosticate it.He started typing on ipad at 9 years ,but sustained by elbow,and proved to be very clever and learned everything ,even if he couldn't show it.Also,he understand his situation and is sad about it,wants to talk,have friends,to stop stimming,and ofted cried about not beeing able to do those.Tried homeopathy for 7 years with no results.Tried gfcf for 2 months ,when he was 4,and stopped because we saw nothingtried GASP at 6 .for 3 months....the sameTried craniosacral few times,but we saw nothing.At 7years started having seisures,once a week.They stopped under KEPPRA,but the EEG showed seisures happening ,even if we couldn't see anything happening with him.They changed Keppra after 3 years,because EEG was not improoving,with ORFIRIL.Then,the EEG was clean and he slept the whole night for the first time in 10 years.After 8 months,they decided to take the ORFIRIL off,slow,but after a month he made a seisure and we are back on ORFIRIL.The dose he was prescribed was 1000mg,but we only give him 500 mg,and seems to be ok,for 10 months now.We are also doing a sort of biomed,including now Stem neuro,Pure dha,Mentat,Ca+D3,Neuro optimizer,Mg,B complex,Taurine,Chlorella,which seem to help him a little beeing able to do few things we are asking him to.We intend to stop them and begin the CD protocol.

There are 5 days since we're not using Omnia anymore.His stimming was so bad,new stimmings,and became agressive ,which is new for us,so we decided to stop Omnia and see if things get better.And they did,he is calmer,cooperative.We didn't decide what to do in the future ,but the next period we will not be using it,to see if he starts improving again.
Thank you

This week we took another 3 points in ATEC.We are giving one drop first thing in the morning and another one last thing at night.We saw no progression this week but some odd behaviours that he had a lot of years ago , tapping his hands and arms like cheking himself.
Thank you

This week we took another 4 points in ATEC.We are using 1 drop,sublingual,last thing in the evening.I feel we should increase the dose,because we are not seeing changes from a long time now.More stimmimg this week.
Thank you

This week ATEC is 31(last week was 30) .WE are giving 1 drop of Omnia sublingual,last thing in the evening .This week was more irritable ,we had a meltdown again ,touches the spot we touch on him ,which looks like OCD.Not so sociable these days,he would stay only on comp.and wach carousels if we let him. A good thing is that he seems to write easier on comp. with me sustaining his arm less ,and at school he has no problem with learning and understanding easy .
Thank you

This week was better,we lost 6 points in ATEC.This is the second week of the second bottle,and we are slowly regaining the state before the second bottle of Omnia.He was calmer this week but his understanding is not as good as before.A compoulsive behaviour appeared from 3 days,if we touch him he touches us back with the part of the body touched , and touches the spot and so on...He had this behaviour a long time ago ,a couple of years,and now we are seeing it again.
We used this week one drop every evening,sublingual.
Also,we are giving GABA,L Carnitine,L Carnosine,DMG , MCT oil ,Salt Baths and CD protocol
Thank you

We finished our first week of Omnia,second bottle.First two nights he had problems with sleep,he woke up around 4 and didn;t get to sleep again.It was a hard week,with agitation ,hand bitting ,not doing what we ask him to ,tantrums,even a meltdown like before we started the CD protocol.We started with one drop in the morning ,first two days,and the we got down to one drop every other day,due to his behaviour.That seemd to help him .We will do that for the next period,untill we will see him calmer.
We are also using CD,L-Carnosine,GABA ,L-Carnitine ,Salt Baths ,MTC oil and SCD diet.I hope he will be better soon.
Thank you

WE finished our first bottle of Omnia. Atec this period fell from 38 to 27 in 7 weeks and a half.This week he was a little more agitated than the last one,but we also receive good feedback from school ,in rest no changes.Tomorow we will start with the new bottle and report the results in a week.
Thank you

WE finished our 7 week of Omnia,and we have drops left for one or two days.This is was a good week,ATEC droped from 35 last week to 26.We are using 1 drop in the morning,sublingual.He understand our explanations more ,does most of the things we ask him to,calm with short episodes of agitation.These days he is trying to speak new words.Maybe,since we started CD protocol ,this is the week when we are seeing the most changes.( 4 months on CD protocol,started with ATEC 84)
We are also using mebendazol for pp ( that"s why we are using just one drop ,because the last months it was too much two drops) ,cayenne for mopping and salth baths every evening.We also started GABA for speech,L-Carnosine and others will fallow.They are not still at their full dose. So we hope to see some speech ,too.
Thank you

We have 6 weeks on Omnia.This week he was sick,from friday he got a low fever(37.5 or a little more) ,headache and throat ache.He slept during the day and not so well at night .We didn't give him med. for fever.We didn't see changes this week,ATEC is 45(last week was 34).We gave him one drop under the tongue in the morning and one in 10 ml of water at night.This week we will also start the PP.
Thank you

WE just finished our 5 week on Omnia.At the beginning of this week we gave 2 drops in 10 ml of water,at bedtime.Then,we gave one drop under the tongue,in the morning,and one in 10 ml water ,at bedtime.We are receiving good feedback from school,he is calm,folow directions,less stimming.A interesting thing happens,he lets us rub his hair at bathtime,He didn't let us do that last years.He sleeps better,too.

We just did another ATEC,13 points dropped from last week.(from 43 to 30 ) . I noticed that, when he was under mebendazole,part of PP ,things were crazy .We realized that when we switched to Neem,he became calmer and cooperative.Maybe this combination was too much for him ,and he probably needed more moppers for the toxins,beside enemas and salt baths.Now he smiles again, laughs again,fallows directions,draws ,not screaming ,not irritable.,not hand bitting since yesterday,a lot less stimming.Since yesterday evening we started giving Omnia ,2 drops in 10 ml of water.We will do so for a week,to see if it will make a difference.
Thank you

We finished our third week of Omnia,2 drops under the tongue.ATEC 43(last week was 44 ).He was very hyper this week,sound sensitive,often covered his ears,destructive(like starting fire in the bedroom,cutting gymball,etc),easy irritable ,fighting with his sister ,stimming a lot. Today is calmer,very different from these last days. He was accusing a headache in the afternoon .We will stay on 2 drops .

We finished our third week of Omnia,2 drops under the tongue.ATEC 43(last week was 44 ).He was very hyper this week,sound sensitive,often covered his ears,destructive(like starting fire in the bedroom,cutting gymball,etc),easy irritable ,fighting with his sister ,stimming a lot. Today is calmer,very different from these last days. He was accusing a headache in the afternoon .We will stay on 2 drops .

We are on day 14 of Omnia .A good thing happened today.He played outside for an hour and a half,and then he came in and went to sleep.This happens extremelly rare ,few times in last years.He worked two days for his snowman ,and I loved waching him doing that.I will put a picture ,even if it isn't a rash or something,it is a sign of normality and a joy for us :) 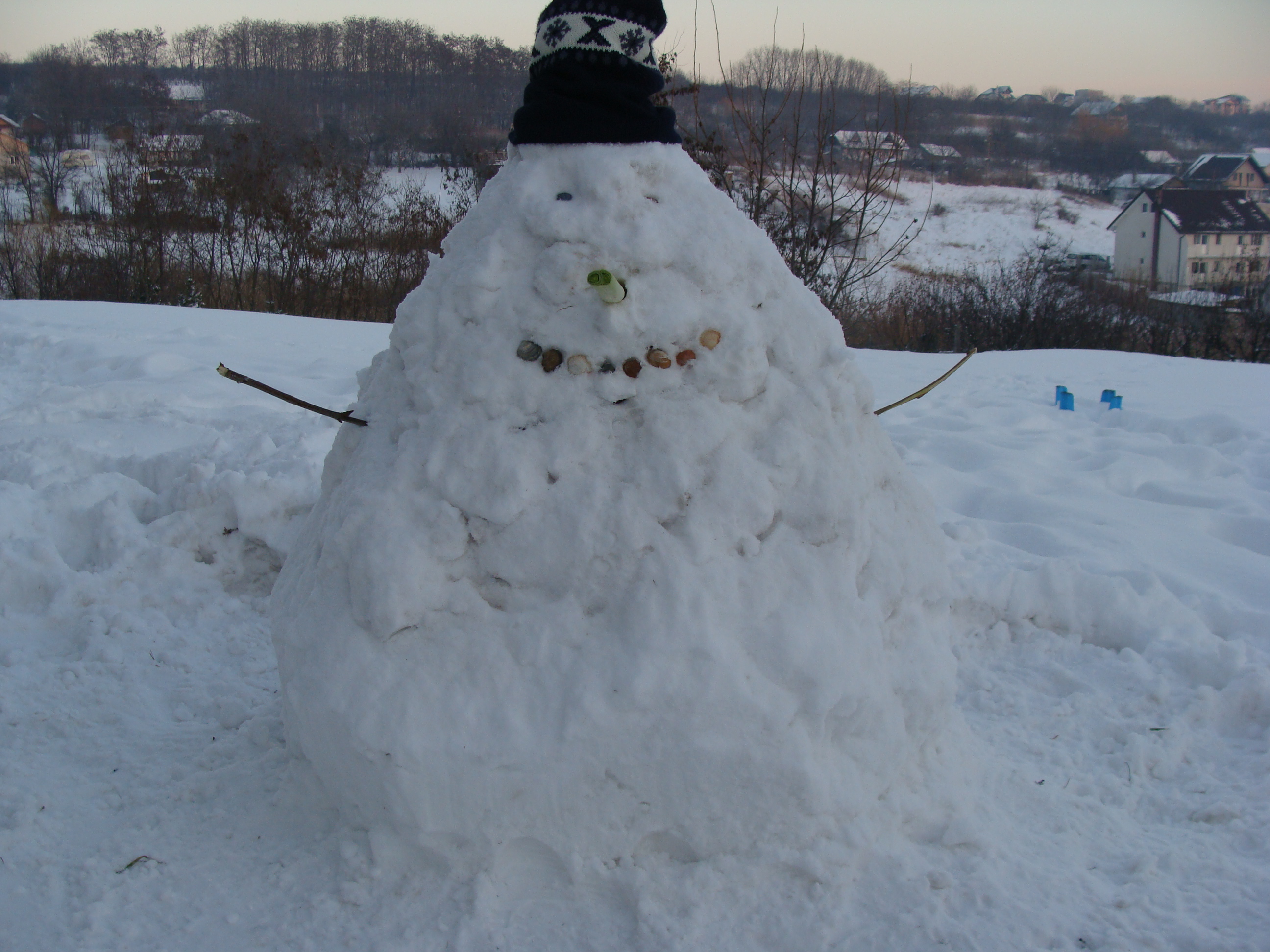 We have 13 days of Omnia.We are using 2 drops this week ,under the tongue.We just completed a ATEC and it raised 10 points since last week.We expected this,it was a hard week,lot of stimming and screaming and not compliant.Yet,at school things seem to go well .Today he got out and played in the snow for about an hour,trying to build a snowman.It was nice seeing him so patient .

We are using Omnia for 12 days now. Last few days was quite hard,a lot of stimming and hyperactivity,had to repeat few times for him to do what we ask him to.We are giving 2 drops under the tongue .He screems and get iritated easily.I also privided a feedback few days ago ,after 7 days of use ,ATEC droped 4 points,but that feedback doesn;t apppear here.

We received Omnia on Dec 30 and started using it from that evening ,one drop under the tongue .First night he slept well and was calm all day.Nothing unusual.
The second evening ,one drop under the tongue.He has gone to bed at 1 am .Until then he did a funny thing,he put a Santa hat on and examined his mimic and his torso on the miror.He stimmed a lot through the next day.
The second evening I pressed a little too much the dropper and two drops came out. He went to bed at 12 but woke up at 12.30 and went to bed at 3 AM. During the day he was calm,almost no stimming until evening.He watched different clips on you tube.In the last months he kept looking at the same trailers and clips on you tube ,dozens of times a day.Today we didn't see them at all.In the morning he rinsed the fork from his plate and then took another fork when I called him at the table,because I cut the fried egg with it and it had egg yolk on it.He was never bodhered before by this detail.We wil continue with one drop for one week.